In May 2017, the 9th Dunblane Pals set out for the Western Front.

During the years of the centenary of WWI it was decided that the school would carry out their own version of the Royal British Legion's 'Everyone Remembered' project: this project created an on-line memorial to 1,060,174 Commonwealth men and women who died in the Great War. The school's version had somewhat more modest aims, this was to take names from the Dunblane War Memorial and if possible visit the site of their burial or memorial in the century year of their death.

Of great use to us was the book written by local historian Ed Campbell. This book helped us tell the story of those who we were to commemorate.

One of these young men was 99336, Private George Wilson of the Machine Gun Corps. Identifying his grave or memorial should have been straightforward for us, we had after all already done the same for about 20 of Dunblane's dead over the previous 3 years.

Unfortunately, there was a typo in the book, probably the one and only one in which is an otherwise excellent book. George Wilson was according to the book commemorated at Theipval.

So, on Somme day we duly turned up at the impressive memorial to the missing of the Somme. I had a note of the pier and face he was commemorated on and I knew what I was going to say. The only problem was that we couldn't locate his name, it wasn't where we thought it should be and it wasn't in the memorial register.

The following day took us to Tyne Cot CWGC Cemetery, the largest Commonwealth cemetery in the World. In Tyne Cot there are 34951 names to the missing, 11968 graves of which 8,373 are unidentified. We were to locate the name of a member of the Argyll and Sutherland Highlanders from Dunblane who has no known grave and was commemorated on the memorial to the missing. This proved to be an identical experience as that of the previous 24 hours at Theipval, despite the best efforts of several 'pals' and both the guide and myself, this man's name could not be located.

Then something happened which, still to this day, gives me goosebumps. Two girls from our party came rushing up, "you have to come and see this, we found a grave" and pointing over to the other side of the cemetery said "it's just over there….somewhere". Thankfully they had put some coins on top of the headstone to help locate it again.

As we walked over to the spot I asked them about their find to be told one of the girls had tripped and fallen she'd landed looking at the inscription at the bottom of the headstone which read, 'BORN AT KIRK STREET DUNBLANE, SCOTLAND 11TH MARCH 1895'.

This was the grave of Private George Wilson who's name we'd unsuccessfully tried to locate at Thiepval.

In common with many of those who paid the ultimate sacrifice in the Great War not a great deal is known about George. He was born in 1895 to George and Mary Wilson who had four other children Margaret, James, David and William. In 1911 the family are living in No.9 Ramoyle, Dunblane and George is working as a 'Washer Up' in a Woollen Mill, at this time there were mills in Dunblane, Ashfield and Kinbuck. Unfortunately George's service records did not survive, but what we do know is that he volunteered initially for service in the Black Watch and later transferred to the Machine Gun Corps.

Having located George's grave an impromptu memorial service was held, a wreath laid and the piper played a lament, it was quite a moving ceremony.

The circumstances surrounding the discovery of George Wilson that day make it seem as though he was wanting to be found, of the thousands of graves in Tyne Cot, one girl tripping and falling at exactly the right spot is almost impossible. Dunblane High School though have decided that once found George Wilson will not be lost again, in 2018 and 2019, either a wreath or across with the school badge was laid, it was also planned to do the same in 2020. He will be visited once more in the not too distant future. 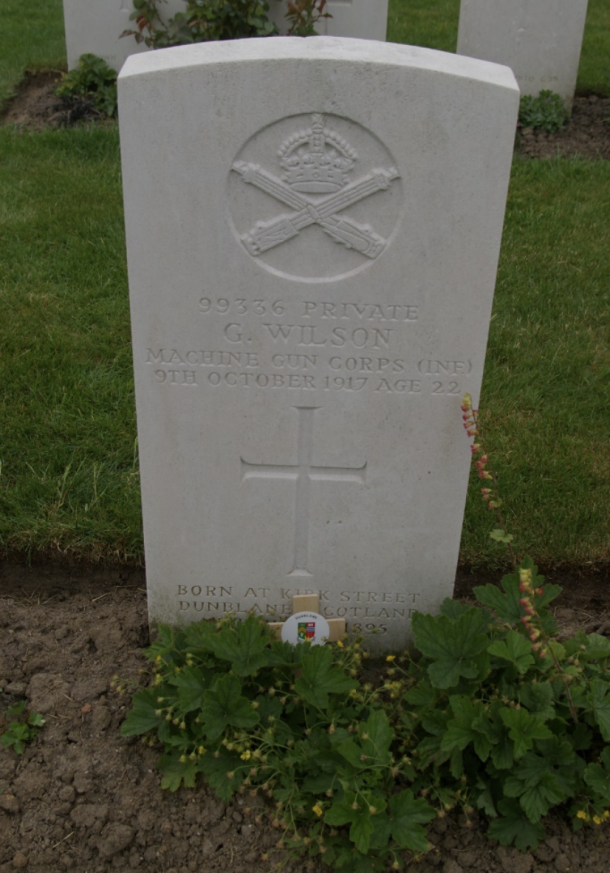