Mercat Tours International director and tour guide, Des Brogan, joins S3 history pupils Amy Collins and Elizabeth Green from Crieff High School and Eilidh Campbell and Emily Gough from Duncanrig Secondary School ahead of their once-in-a-lifetime trip to France to observe the centenary of the Battle of Arras at Scotland’s commemorations.

Organised by WW100 Scotland and operated by Mercat Tours International, the students are among 72 pupils representing each local authority in Scotland selected for the five-day trip. The Scottish pupils will be joined by a matching number of French and Canadian students at a memorial service at the Faubourg d’Amiens Commonwealth War Graves Cemetery in Arras on Sunday 9 April, where they will lay a wreath on behalf of the nation and place poppy crosses on graves.

The Battle of Arras had the highest concentration of Scottish troops fighting in a single battle during World War One and 18,000 Scots lost their lives. Organised by WW100 Scotland in conjunction with  Mercat Tours International, the Armed Forces in Scotland, Legion Scotland, the Commonwealth War Graves Commission and Education Scotland, the commemorations will drive WW100 Scotland’s aim to encourage a spirit of research and inquiry, particularly among young people, to help create a lasting legacy. Pupils will soak-up the history of the battle during their time in Arras in order to share their experience and reflections with their peers when they return.

Des Brogan, Director, Mercat Tours International commented: “I’ve been leading battlefield tours of France and Belgium for over 35 years and have never had such a geographically diverse group of students. I’m looking forward to introducing the pupils to this poignant history that affected so many in Scotland, Britain and around the world. From the Somme Battlefields to the Wellington Carriere Tunnels, these pupils will walk the paths taken 100 years ago. The fact that they will return to their fellow pupils to share their experiences is remarkable.”

In addition to the 9.30am service, which will be led by the Moderator of the General Assembly of the Church of Scotland, the Band of the Royal Regiment of Scotland will conduct a Beating Retreat in the Place des Heros at 7.45pm.

The Battle of Arras, which took place between 9 April and 16 May, 1917, was part of a planned offensive by British and French forces. Forty four of the 120 battalions that made up the ten British assault divisions were Scottish. The average daily casualty rate was 4,076, which was higher than that at The Somme or the Third Battle of Ypres. Of the approximate total 159,000 casualties, an estimated 18,000 were Scottish, the equivalent population of a Scottish town such as Dumbarton, Peterhead or St Andrews, or the capacity of Hearts’ ground at Tynecastle.

Cabinet Secretary for Culture, Tourism and External Affairs, Fiona Hyslop, said: “The Battle of Arras is of huge significance to Scotland’s commemorative calendar. Forty four Scottish Battalions and seven Scottish-named Canadian Battalions took part in the engagement – the highest concentration of Scottish troops fighting in a single battle during World War One.

“The casualties had a devastating impact on those back home at the time, and resonate to this day in our collective memory. I am heartened that our young people will attend this commemoration – helping to ensure future generations will not forget the horrors and grief associated with war.”

As well as participating in the Arras commemorations with Mercat Tours International, students will visit a range of other battlefields, cemeteries and memorials relating to the battles of Loos, the Somme and the Third Battle of Ypres. 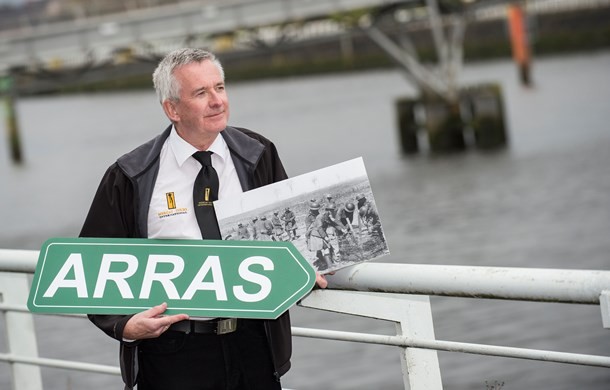 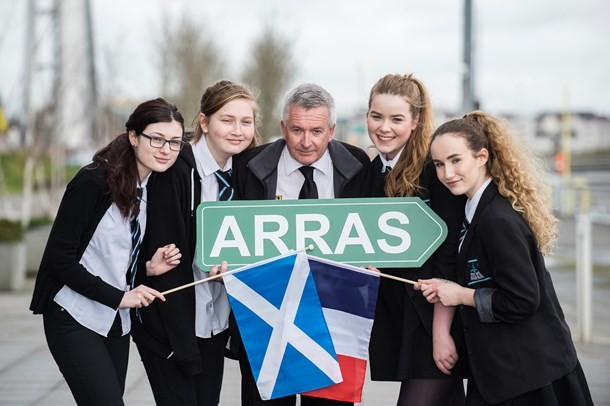